Research cooperation with the City of Vienna - MA 18

The development paths of autonomous driving are considered to be extremely unsafe, not least due to the recent health crisis. While the technological promise of putting highly automated vehicles on the road has not yet been kept, new mobility offers such as car sharing or ridesharing are losing demand due to travel restrictions and distance rules. A significant development, because the shared use of autonomous vehicles in particular would have positive effects on urban space.

As part of a research cooperation with the City of Vienna - MA 18 (urban development and urban planning), researchers from the future.lab Research Center addressed the question of how the introduction of autonomous vehicles could be reflected in different street areas of Vienna. * Based on a traffic simulation study to what extent possible changes in the volume of traffic would be beneficial for the surrounding uses and to what extent design requirements would change. In order to show a variance in the development possibilities, an inner-city district street, a main road on the outskirts and an access road in a commercial area were selected as exemplary study areas.

For inner-city residential areas with intensive business use, the underlying simulation study showed, for example, that the use of demand-based autonomous shuttles would cause a higher volume of traffic, especially on low-level roads. Due to a large number of existing usage requirements (e.g. pedestrian and bicycle traffic, charging activities, gastronomy and leisure activities), this would result in a deterioration in tolerability for certain neighborhood streets. In view of urban development goals, there is pressure to act, but also the possibility of optimizing autonomous systems through creative measures. This includes, for example, the establishment of dedicated stopping areas, the definition of low speeds and the expansion of facilities for pedestrians and cyclists (see figure). A low speed limit promotes safe interaction between the modes and helps reduce traffic volumes. Meanwhile, assembly points in the form of stopping zones facilitate higher occupancy rates (ride sharing) and contribute indirectly to a reduction in the need for parking space. The extent to which the space requirements of the remaining parking space requirement, the cycling facilities and the stopping areas as well as the loading areas for autonomous vehicles are integrated into the urban space has a fundamental effect on the permeability and ultimately the attractiveness of future streets.

The change potentials visualized in the course of the study neither represent idealized images of the future, nor do they define prerequisites for the use of autonomous vehicles. The investigation opens up much more areas of tension in the spatial transformation with autonomous driving and thus provides information for forward-looking planning action. In relation to older studies, it is emphasized that the effects of new mobility technologies must be viewed differently depending on the spatial structure and street typology. Usage neighborhoods and possibly contradicting requirements of the traffic modes have to be taken into account as well as the requirements of traffic flow efficiency and interaction security.

* The research cooperation "auto.WAVES - Road Spatial Effects and Compatibility of Automated Driving" was created in 2020 in cooperation with the City of Vienna - MA 18 Urban Development and Planning. The framework was the research project "auto.WAVES: Autonomous Driving - Impact Analysis of Transport, Energy and City for the Vienna Area", which was funded from 2018 to 2020 by the FTI innovation fund of Wiener Stadtwerke. 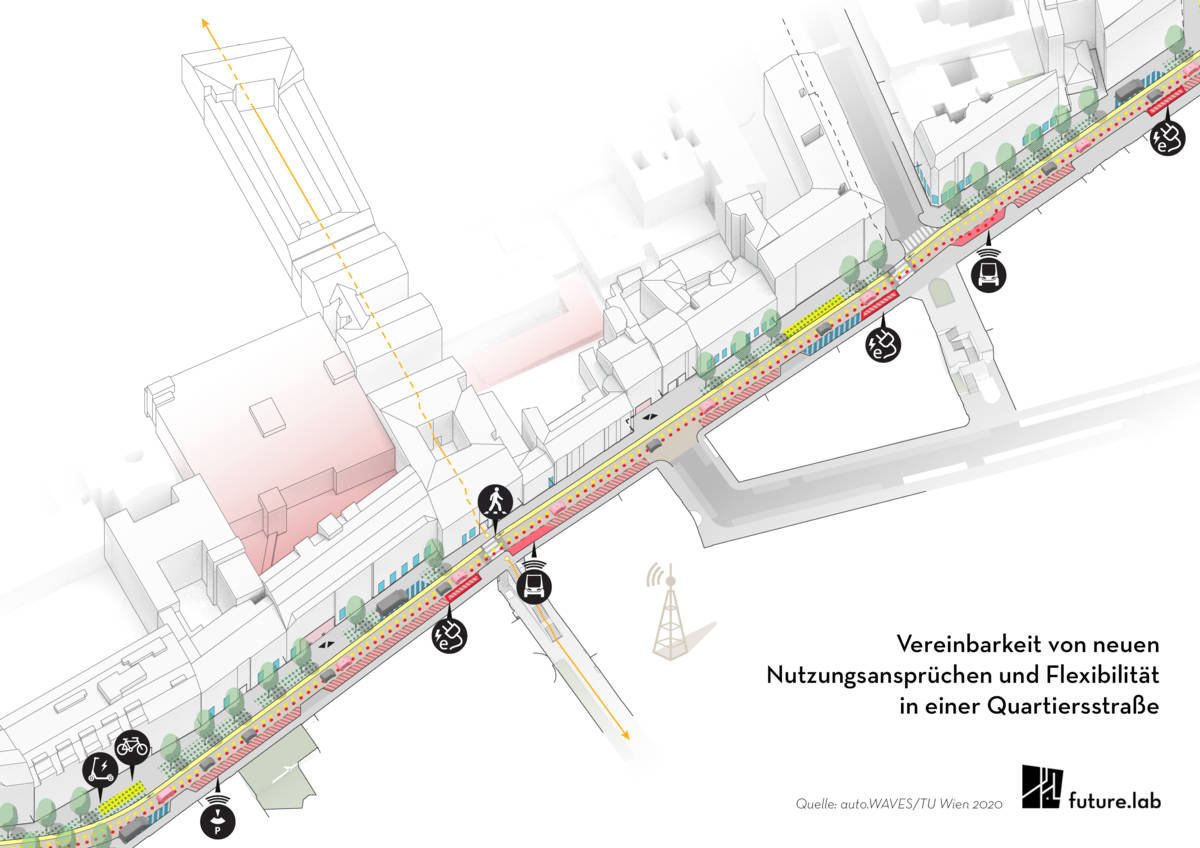